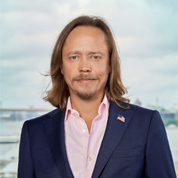 Chairman of The Bitcoin Foundation

Blockchain pioneer, impact investor, and philanthropist with an extensive track record of founding, advising, and investing in disruptive businesses.

Brock Pierce is been credited with pioneering the market for digital currency and has raised more than $5B for companies he has founded. Pierce is the chairman of the Bitcoin Foundation and co-founder of EOS Alliance, Block.one, Blockchain Capital, Tether, Mastercoin (first ICO), and Lighthouse NFT Smart  Gallery, the first physical NFT smart gallery. In 2020, Pierce ran for President of the United States as an Independent, receiving the first-ever US presidential vote cast on the blockchain.

Block.one was co-founded by Pierce in 2017. Block.one has sold over $4B tokens in the EOS crowd sale making it the largest ever. Blockchain Capital was  founded in 2013 and is the first sector-focused venture fund that invests solely in Blockchain technology companies. Pierce led the firm through the first ICO of a venture fund, which created the first security token, BCAP.

Blockchain Capital has made more than 100 investments in the sector across its four funds. The firm was named the most active FinTech Venture Fund by Pitchbook. Tether, the first stable coin and asset-backed token, is the most traded cryptocurrency by volume. Pierce is an early investor in Bitcoin and one of the largest investors in the Ethereum crowd sale. He is the founder of IMI Exchange, the world’s leading digital currency marketplace for games, with annual sales exceeding $1B and investors such as Goldman Sachs (sold in 2016 for more than $100M). Pierce founded ZAM, one of the world’s largest media properties for gamers, which was acquired by Tencent in 2012. He founded IGE, the pioneer of digital currency and virtual assets in online games, achieving revenues exceeding $100 million in 2006 and sold in 2007.

Pierce is also a co-founder of D10e, GoCoin, the first cryptocurrency platform to fund a political campaign, Blade Payments, Five Delta (sold NASDAQ: SRAX), Xfire 2.0, Playsino, Evertune, and GamesTV. He serves as an advisor to a number of companies, including Airswap, Bancor, BitGo, BitGuild, Bloq, DNA, Element Group, Metronome, Shyft, tZERO, ODX and BlockV, the first NFT platform in the world. He is a General Partner in Space Fund and sits on the Board of Directors for Bitdigital, one of the largest cryptocurrency mining companies in the US. Pierce is an active supporter of the American Civil Liberties Union (ACLU), the Foundation for Individual Rights in Education, the Center for Individual Rights, and the Brennan Center for Human Rights. Pierce is Chairman of the Integro Foundation, a Puerto Rico-based non-profit focused on helping Puerto Ricans and supporting environmental and humanitarian efforts throughout the Caribbean region. Pierce is also Vice Chair of the U.S. Marines Toys for Tots Foundation of New York, Long Island and Puerto Rico. In 2021, Pierce sponsored the NYPD Gaming Trucks Initiative, to build inroads between police and the communities they serve. As co-founder of the United Council of Rising Nations, Pierce advises political and industry leaders around the world on the future of finance, technology, and sustainable development. Pierce is a frequent lecturer at Singularity University and has spoken at the Milken Global Conference, Mobile World Congress, Wired, INK, Stanford University, USC, and UCLA. He has been featured in numerous publications, including The New York Times, Forbes, Fortune, Bloomberg, Wired, Rolling Stone, Politico, New York Magazine, L’Officiel, VTDigger and the Vermont Business Magazine.